When I saw Netent were bringing out a sequel to my favourite game of all time I simply had to review it. My first impressions weren’t great from a limited test play with real money but I soon found a demo on release and spun away to get a better feel for it, so grab your space rucksacks and lets go crystal hunting!

Unlike the original Space Wars, the sequel has a 6×6 grid setup with clusters similar to other titles like Reactoonz but that’s where the similarities end. Instead of getting wins in cash for any clusters, you get awarded Powerpoints (hence the name) which then add up above the reels in a collect meter and at the end of any reactions the award is given based on the total amount of Powerpoints collected.

During the base game you are trying to collect 1000 or more Powerpoints to activate free spins. The number of free spins is determined by the total number of Powerpoints collected, you can start with 8, 10 or 12 free spins respectively.

Space Wars 2 Powerpoints also has several modifiers that are found in both the base game and the free spin feature. The first of these is the Column/Row Blaster which is a little rocket that’s revealed behind a 4 symbol horizontal or vertical reaction. In this feature all symbols except for wild symbols and other feature symbols are removed on that column or row as it blasts off the grid, this then adds extra Powerpoints to the collect meter. 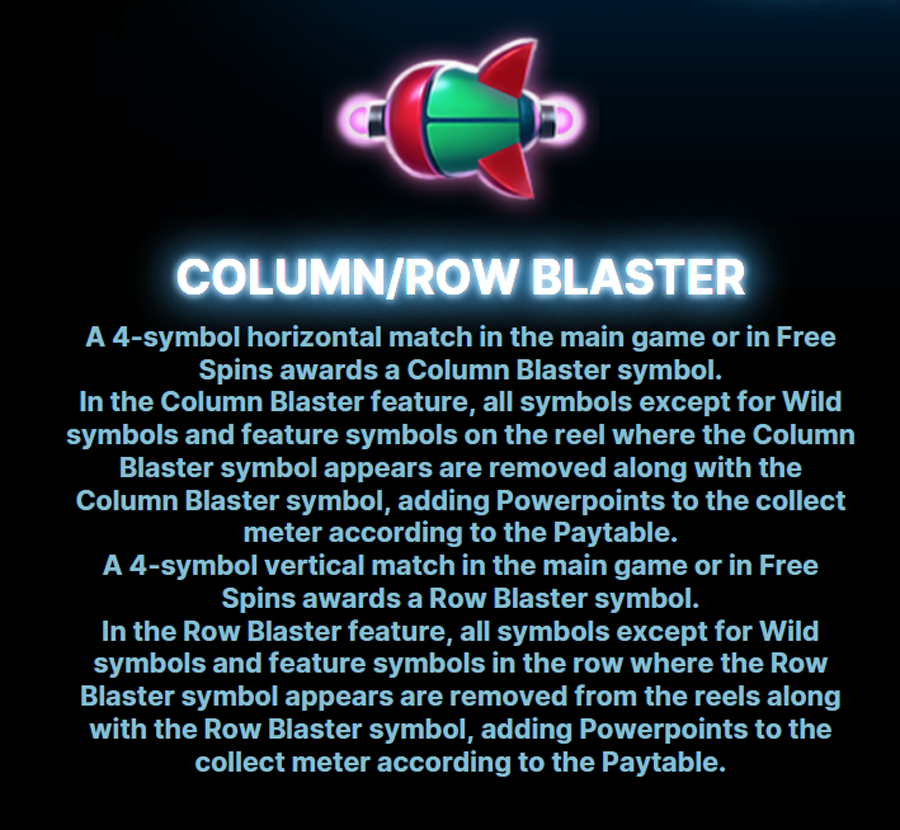 The next feature is the Bomb. A vertical and horizontal match of the same symbol intersecting activate the Bomb feature, in the Bomb feature all symbols except for wild symbols and other feature symbols that are horizontally, vertically and diagonally adjacent to the Bomb symbol are removed from the reels along with the Bomb symbol. The corresponding amount of Powerpoints are then added to the collect meter.

The number of removed symbols depends on the position of the Bomb symbol and can range between 3 to 8 symbols. If the Bomb feature affects a Multiplier Wild symbol it multiplies the total amount of Powerpoints awarded for the symbols removed in the feature by it’s value and disappears from the reels. 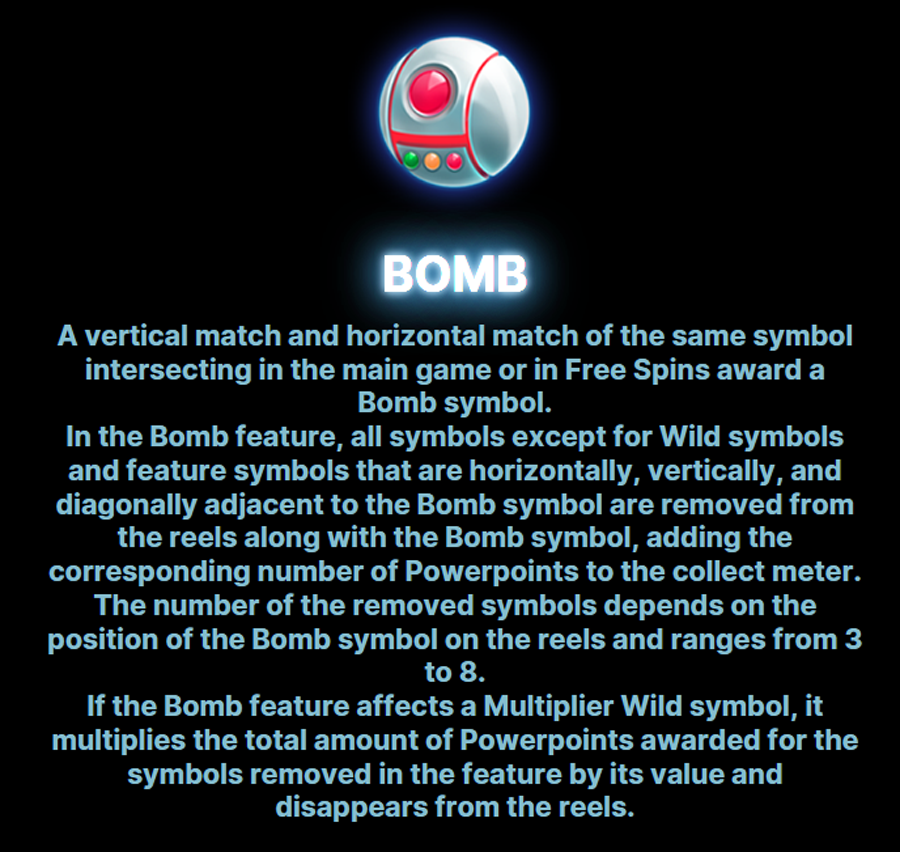 The next feature is the Wild and Multiplier Wild. A 3 symbol match in the main game or in Free Spins awards a wild symbol that appears in place of one of the removed symbols before the avalanche. Multiplier Wild symbols can appear anywhere on the reels in Free Spins and are assigned a random value of x2, x3, x4, x5, x10 or x25!

Now we have combos! The first combo is Column/Row Blaster + Bomb, a combination of the above appearing horizontally or vertically adjacent after the Avalanche awards the Combo 1 feature. The Column/Row Blaster symbol merges with the Bomb symbol shifting to it’s position on the reels.

If the Combo 1 feature is a Column Blaster and Bomb all symbols except for the Wild symbols and feature symbols will be removed along with 2 reels adjacent to the right and left are removed. If the feature is activated with Row Blaster and Bomb the same happens but with the Rows rather than Columns respectively.

In the Combo 2 feature, 1 to 3 types of high/medium/low symbols on the reels along with the Zapper symbol that awarded the feature transform into Bomb symbols. The Bomb feature is then activated according to the feature execution order. 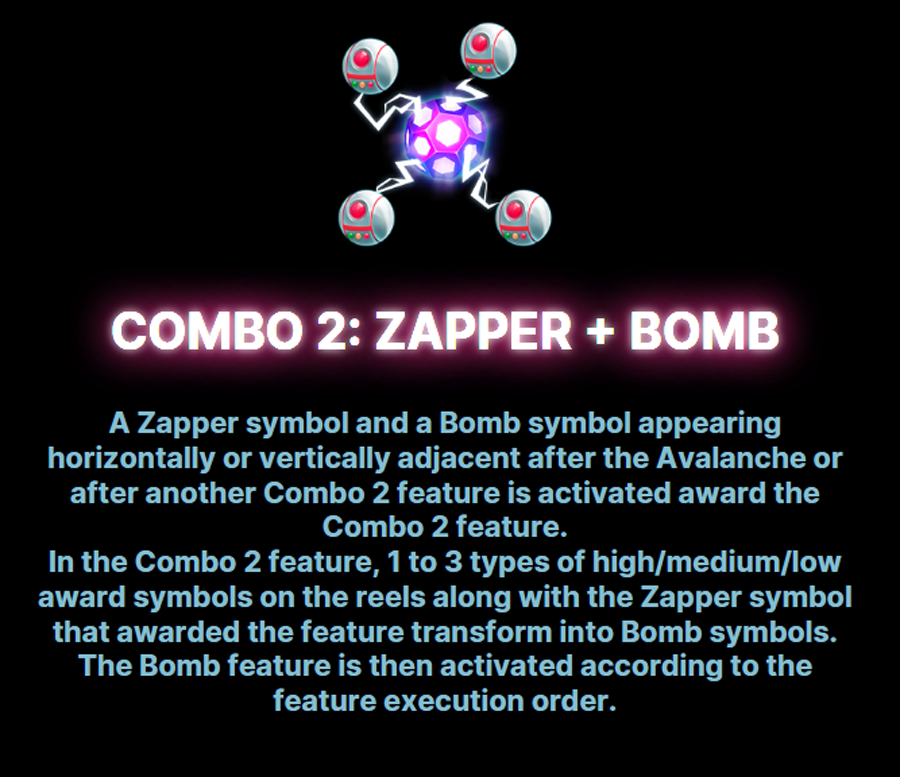 In the Combo 3 feature, 1 to 3 types of high/medium/low symbols on the reels along with the Zapper symbol that awarded the feature randomly transform into Column or Row Blaster symbols, that Blaster feature is then played according to the feature execution order. 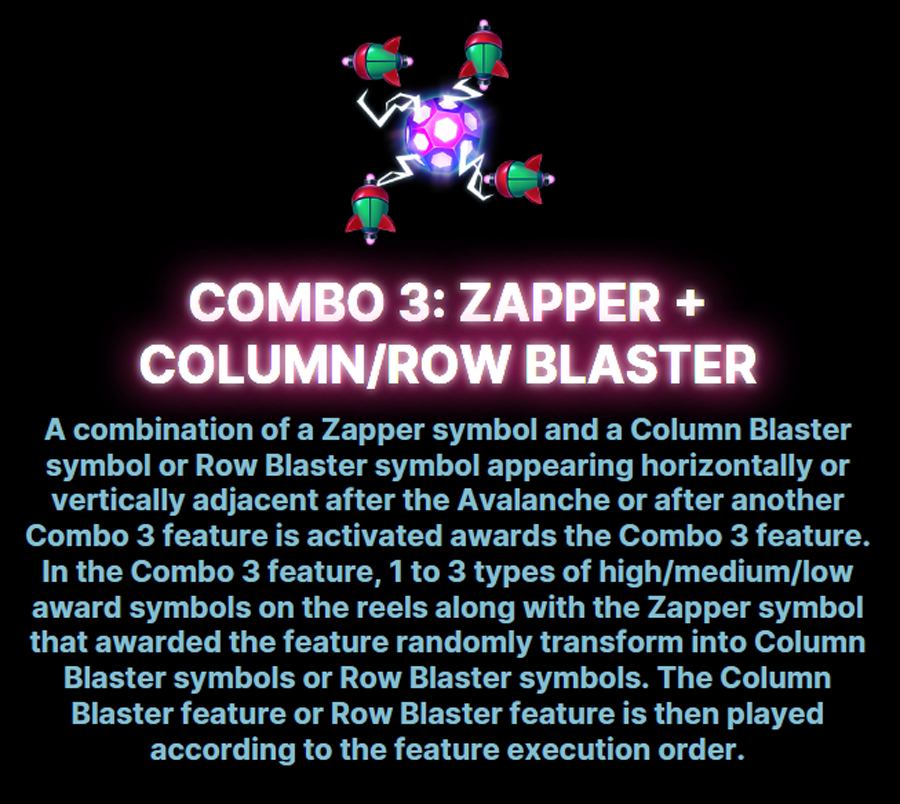 For each spin that you land a Cowboy on the final reel, all symbols of that type will turn to Wild symbols . For each spin a random multiplier with a range from x5 to x999 will be drawn and apply to a random Cowboy symbol. The multiplier only affects the drawn Cowboy symbol and adds to the overall multiplier before payout is calculated.

The paytable in Space Wars 2 is fixed as it only states the Powerpoints awarded for each reaction, the wins are determined by the total amount collected either in a single spin or in multiples spins if you’re in the feature regardless of stake size. The Low Award symbols pay between 10 and 80 Powerpoints for a reaction. 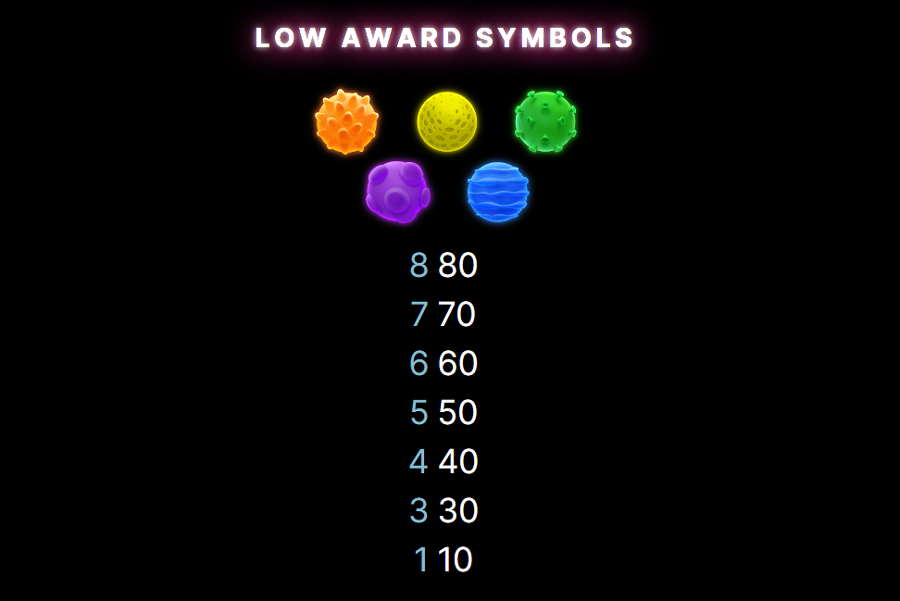 The Medium Award symbols include the tiny troops in yellow, the big mouth mob in green, the brute brigade in purple, the hot lip legion in blue and the squid squad in orange. These charming little fellas can award 20 to 160 points depending how many of them you have. 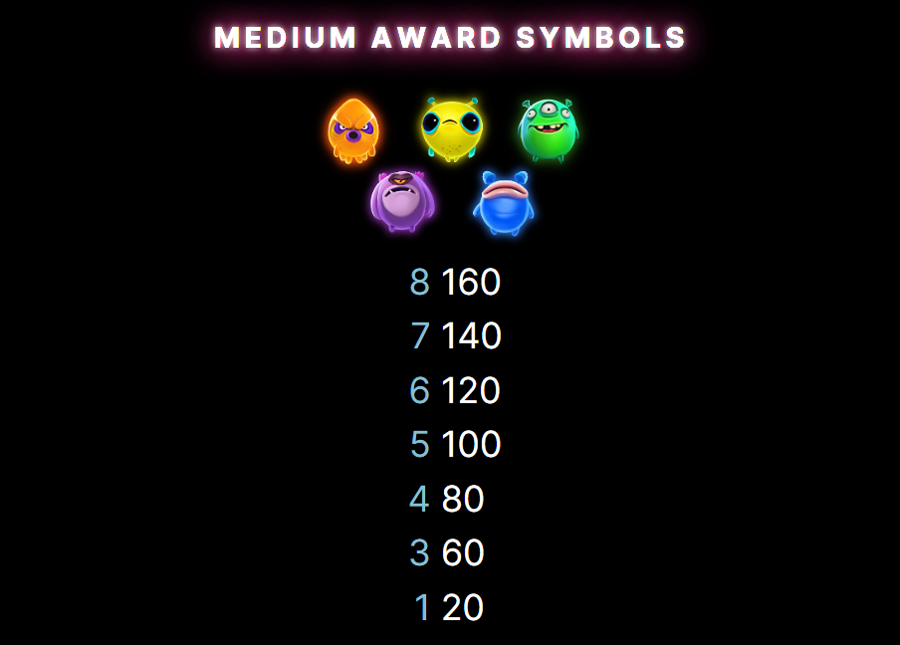 Finally that leaves us with just 1 symbol remaining, the Crystals!!! These beauties can pay 30 to 240 points respectively. However it is worth noting that unlike the original Space Wars you don’t just rely on getting Crystals, the big wins can come from lots and lots of in game features during free spins as I found when winning 1000x on demo mode (Boo!) 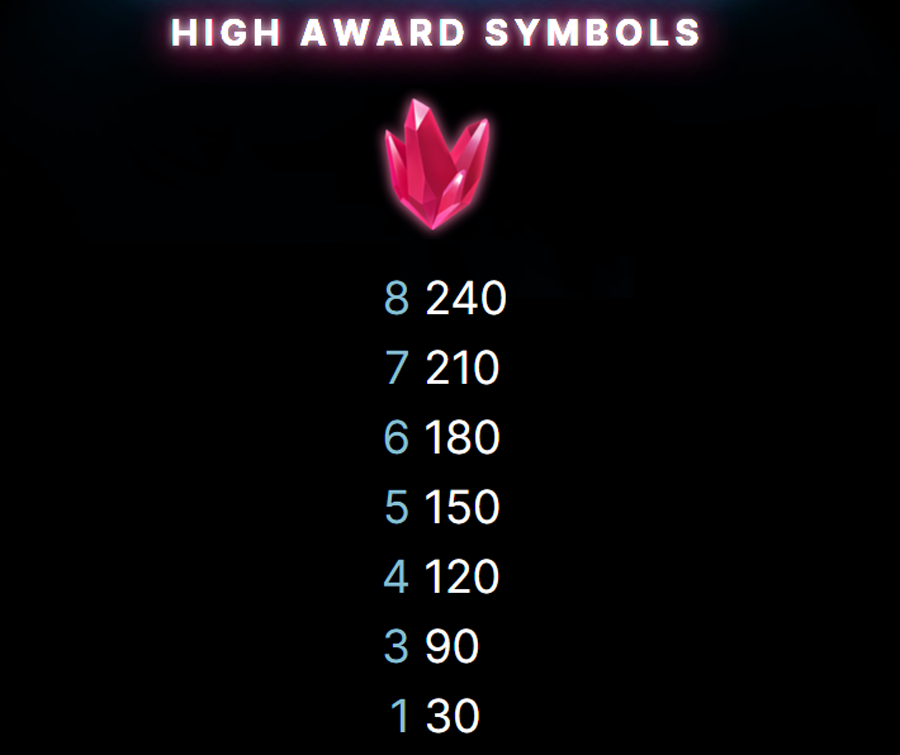 Space Wars 2 Powerpoints has an RTP of 96.05% and the volatility is High, the graphics are beautiful and the soundtrack hasn’t changed from the highly successful original. I don’t really know what I was expecting when I saw Netent tease that this was on it’s way but it wasn’t a cluster game I had in mind, I wanted the original mechanics with a little something added but to be honest this is far from the flop that I originally thought it was.

Would I play this again, yes I will, purely as I love the theme and it brings back fond memories of huge wins on the original many years ago. It will certainly take some getting used to the new mechanics but I think it will be a fun ride along the way.

As always thanks for reading if you’ve made it this far and there’s a link below to a TGC trusted casino if you wish to go Powerpoint hunting yourself!